Preseason mysteries accompany every team and every season, but the AUDL’s Canadian contingent—the Montreal Royal, Ottawa Outlaws, and Toronto Rush—enter the 2022 campaign with a completely different frame of reference.

It’s been 32 months since the Rush lost to New York in the 2019 East Division final. Since then, neither the Rush, Royal, nor the Outlaws have had any chance to compete against an American opponent, as they spent the 2021 campaign competing against each other in the Canada Cup—they’ve only had each other.

Now, with the new season less than six weeks away, they are all super eager to rejoin the chase for an AUDL Championship.

“It was great winning the Canada Cup,” said Montreal veteran Kevin Quinlan. “But it’s like, all these young guys are super talented and just so eager to prove themselves on the bigger stage.” 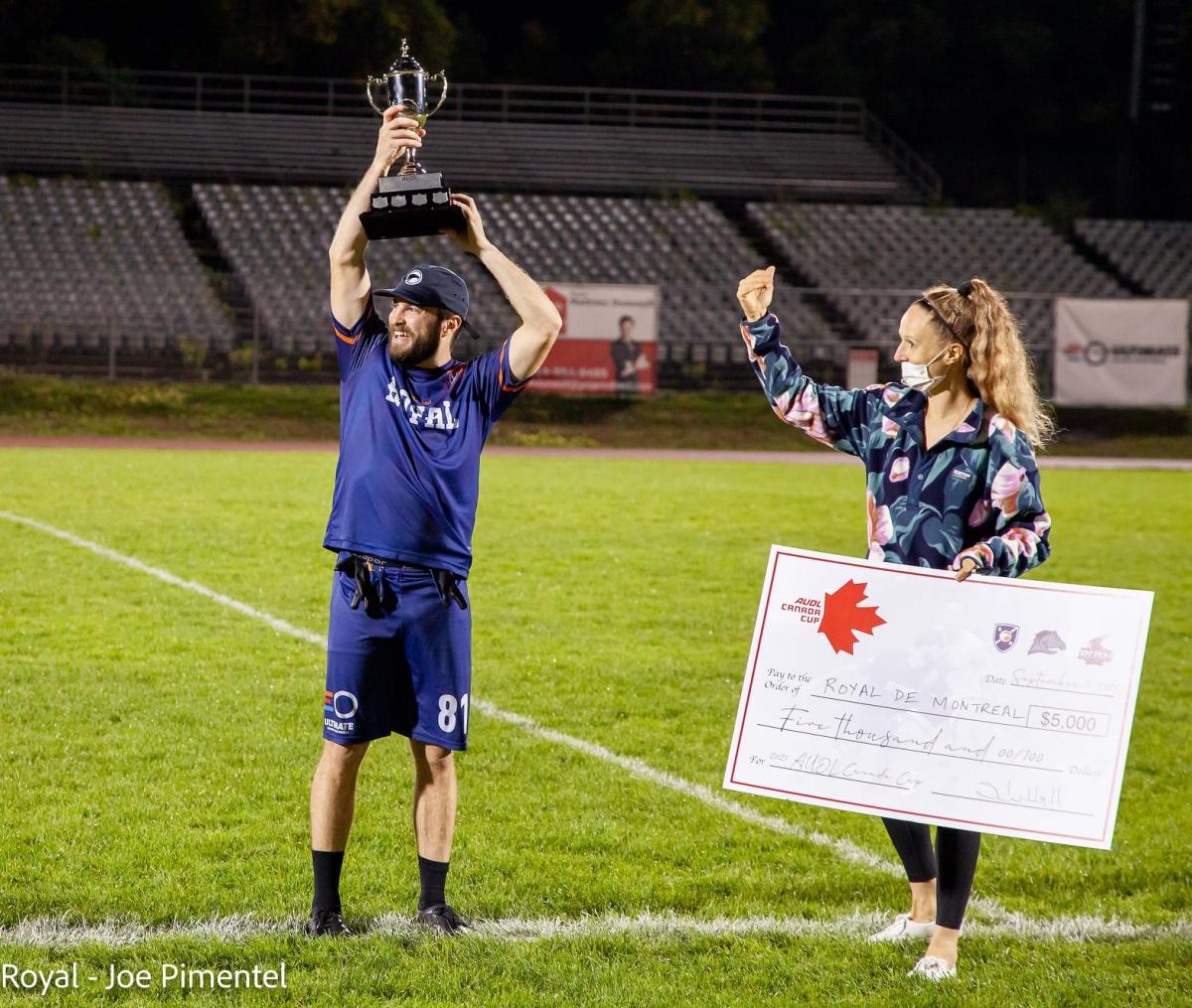 Certainly, there’s a history of Canadian teams holding their own and then some. In the previous seven seasons that saw Canadian franchises battling amongst their American AUDL peers, at least one squad from north of the border qualified for the playoffs every year. Toronto made five straight Championship Weekends from 2013 through 2017, appeared in three title games, and still own one of the three perfect seasons in AUDL history, going 19-0 in 2013. Montreal, who’s generally resided as the Rush’s pesky little brother for much of the Royal’s existence, was still good enough to earn postseason berths in 2015 and 2017, and Quebec fans have long been considered among the most dedicated and loyal in the league; Montreal hosted 2017 Championship Weekend because of their raucous turnouts; the 2021 Canada Cup final was packed and electric throughout a downpour.

Last year, limited to their regional triangular competition due to continued pandemic protocols that made it difficult to cross the border, the traditional Canadian hierarchy got flipped upside down.

It began with the Ottawa Outlaws—8-32 in their previous three seasons—shocking all rational expectations by sweeping a two-game weekend behind Nick Boucher’s otherworldly throwing performances. After that, the Royal quickly recovered from their opening hiccup, winning seven of their last eight, including a 19-18 triumph over the Rush in the climactic Canada Cup Championship. As for the perennial powerhouse program from Ontario, the Rush salvaged their final three contests against Ottawa, but stunningly finished winless in five matchups against Montreal.

Consequently, for perhaps the first time in their franchise’s existence, Toronto enters a season far from the world of being an annual postseason favorite. Since compiling an 85-13 record over their first seven seasons, the Rush have undergone nearly a complete roster overhaul, with arguably their most recognizable asset, Adrian Yearwood, now on the sidelines serving as the head coach.

“There are only eight or nine returning players [from 2021], and five of those returning players were rookies last year,” said Yearwood. “So the team is looking very different, which is a good thing. Maybe not standings-wise this year, but for the future and development, it’s a really good thing.” 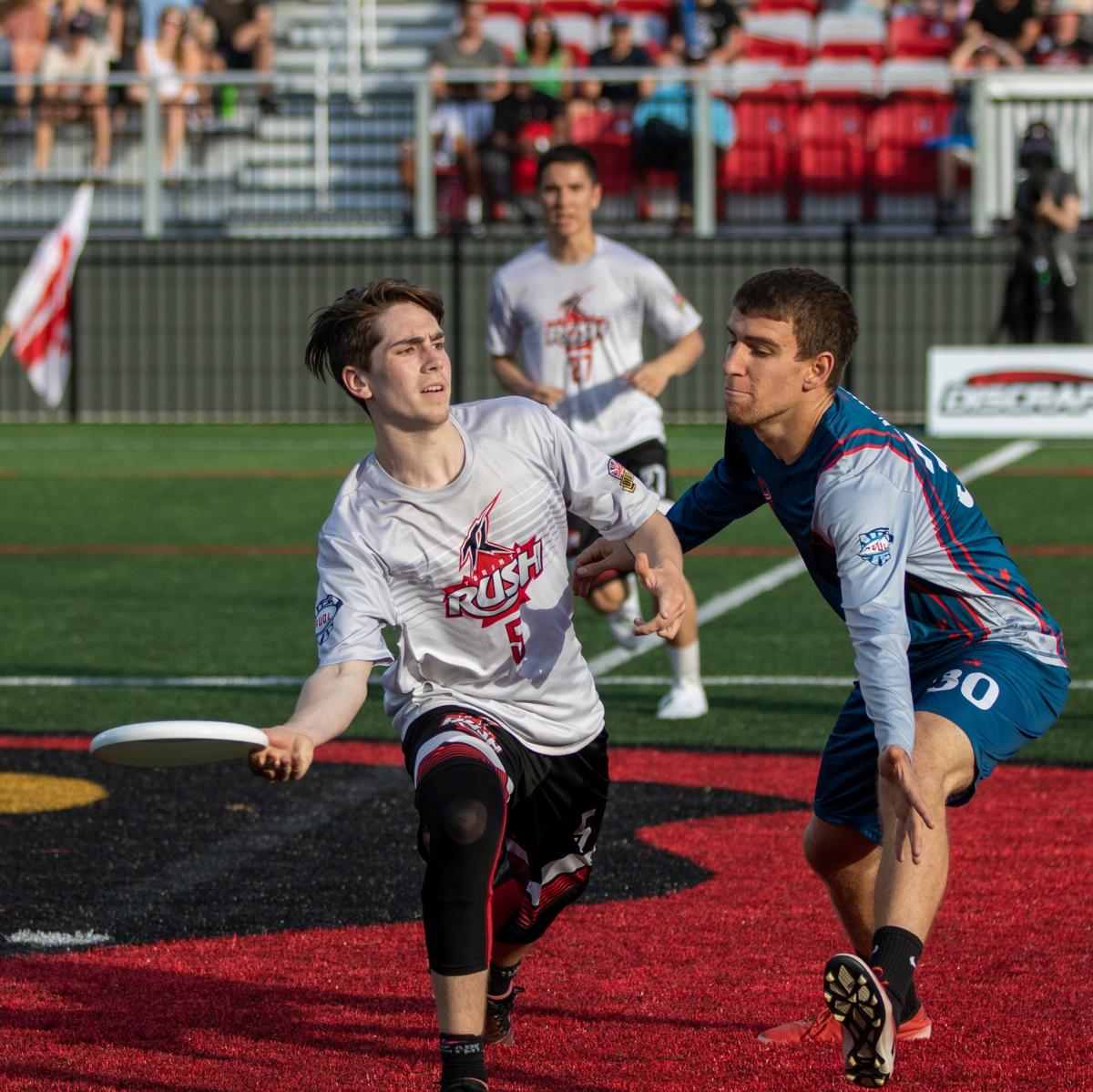 The new-look Rush will still have talent—Phil Turner registered 21 blocks in just nine games last year and Luc Comire also flashed great potential as a high-volume handler—but when you see several legends step aside all at the same time, a bumpy rebuilding process feels inevitable. Gone are franchise staples like Cameron Harris, Thomson McKnight, and Isaiah Masek-Kelly, leaving the next generation to carry the torch.

Still, Yearwood has been very encouraged by the team’s first few practices.

“It’s really cool to have that injection of super fresh and super hungry energy and people who are excited to be there and work,” Yearwood said. “They don’t have the expectations of ‘we’re the Rush, so we win.’ We’re gonna go out there and see what happens and try our hardest and forge a new kind of legacy.”

While the Rush may be in year one of a multi-year process, the Royal enter the spring significantly further along.

“Our biggest challenge is battling expectations,” said Montreal Head Coach Jon Hayduk. “With our successes last year, there is a trap waiting for us assuming that it will all just happen again.” 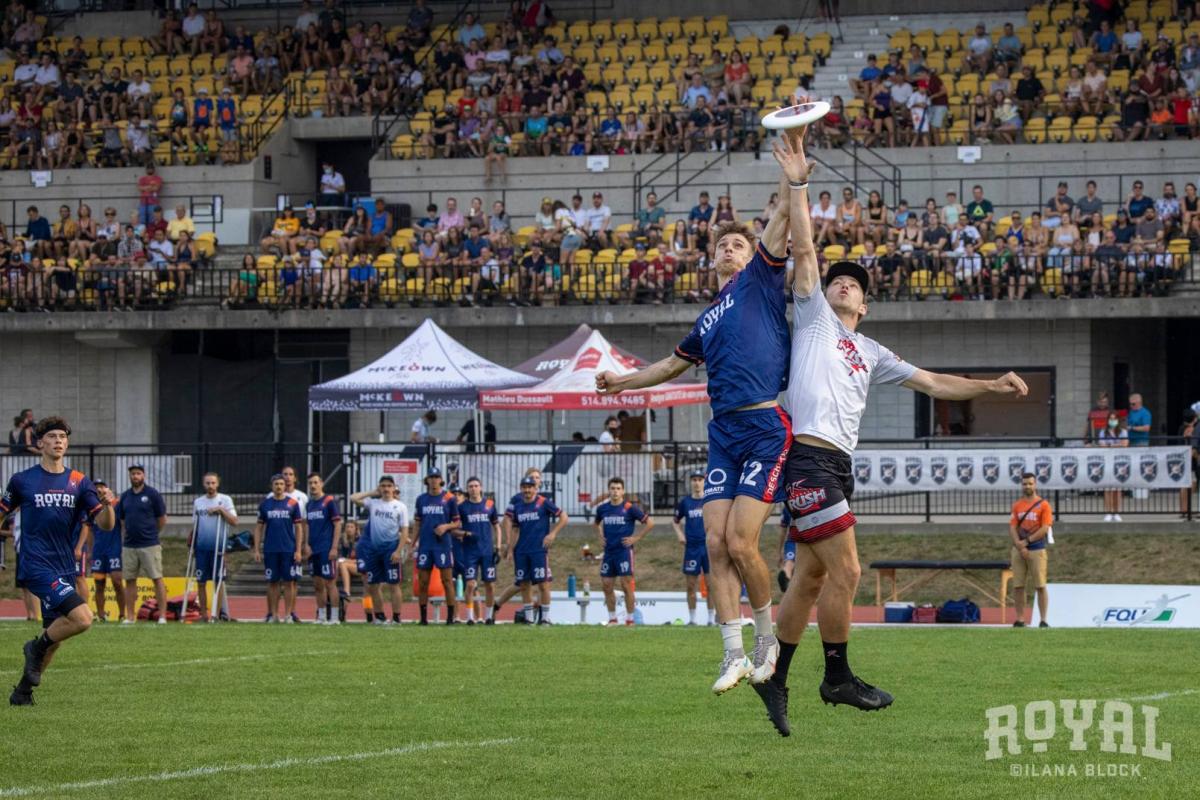 With a mix of experience and young rising stars, the Royal begin the 2022 season with a full roster whose average age is 23. In fact, Montreal has 17 players who are 23 or younger, many of whom have been aspiring to make an impact at the pro level for nearly a decade.

“Kids who’ve been playing on the team now have been watching me since they were 11 and 12 years old,” said Quinlan, one of the four AUDL players who’s competed in every season since 2012. “It’s bizarre to have them as teammates. Jakob Brissette, I remember him coming to games!”

The 21-year-old Brissette, who tossed 35 assists in eight games last year, should again be one of the cornerstones of the offense, though it’s the Royal’s depth that should separate them from their Canadian counterparts. Christophe Tremblay-Joncas and Malik Auger-Semmar—both of whom were named captains for the 2022 Royal—are also among the final 12 men under consideration for the Canada World Games roster. Miguel Goderre remains an underrated disc-mover on the Montreal O-line, coming off a season where he completed better than 97 percent of his passes. Vincent Lemieux, Nabil Chaouch, and Ywan Cohonner are three more playmakers, all 25 or younger, that the Royal believe are destined for big seasons.

Montreal has also cultivated a much-discussed pipeline with the French National Team, with Quentin Bonnaud and Sacha Poitte-Sokolsky becoming borderline stars in the past two AUDL seasons. Currently, they are in France, training to represent their country in the upcoming World Games, but the Royal expect to get them on the field at some point this season, adding to the team’s overall firepower and potential; Bonnaud led the league in goals in 2019 and was the team’s sole selection for the All-Star Game, while Poitte-Sokolsky led the team in scores in 2021 and averaged the most goals per game (4.78) of any AUDL players in 2021. 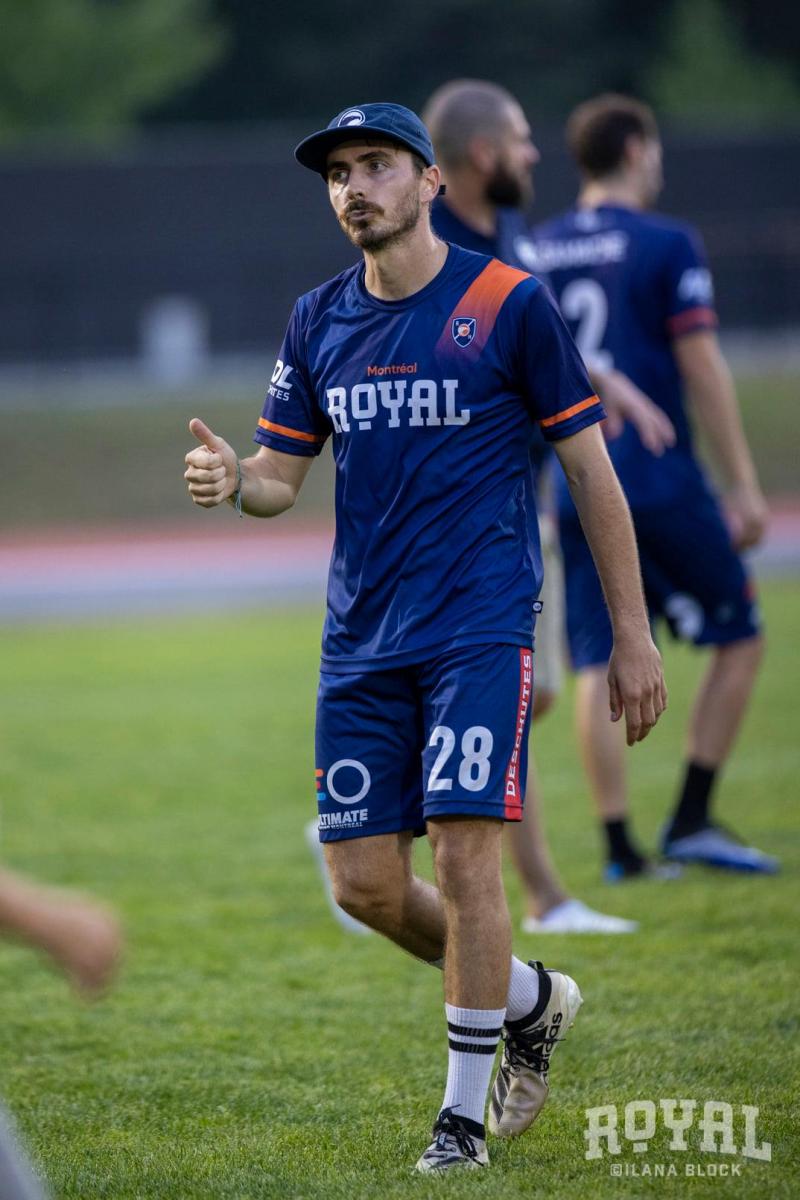 All together, the Royal believe they are ready to re-enter the AUDL East Division as a playoff contender, eager to build off their triumph in last year’s Canada Cup.

“I’m really excited to see all the teams with the new generation of Royal,” said Quinlan. “I’m very confident in these guys.”

It’s impossible to know right now whether the Royal’s newfound swagger will actually translate into wins over established powerhouse teams like New York and DC, but there sure will be plenty of intrigue surrounding those matchups. And Montreal will actually learn quite a bit about itself very quickly, with five games in the first three weeks of the season, four of which will be on the road. Their only home date in that stretch—a Week 2 showdown with Boston—should also be an important measuring stick indicator for the Royal’s potential postseason participation.

“In the end, our goal is to build a program here,” said Hayduk. “It’s not [enough] just to succeed this one year. A part of that is to really broaden our competitive horizons. We need reps against the top American teams. All due respect to the Rush and the Outlaws, they push us hard and have some great players, but we want to learn, we want to get that diversity of experiences and push ourselves against these top-tier players. We want to play. We want to prove ourselves.” 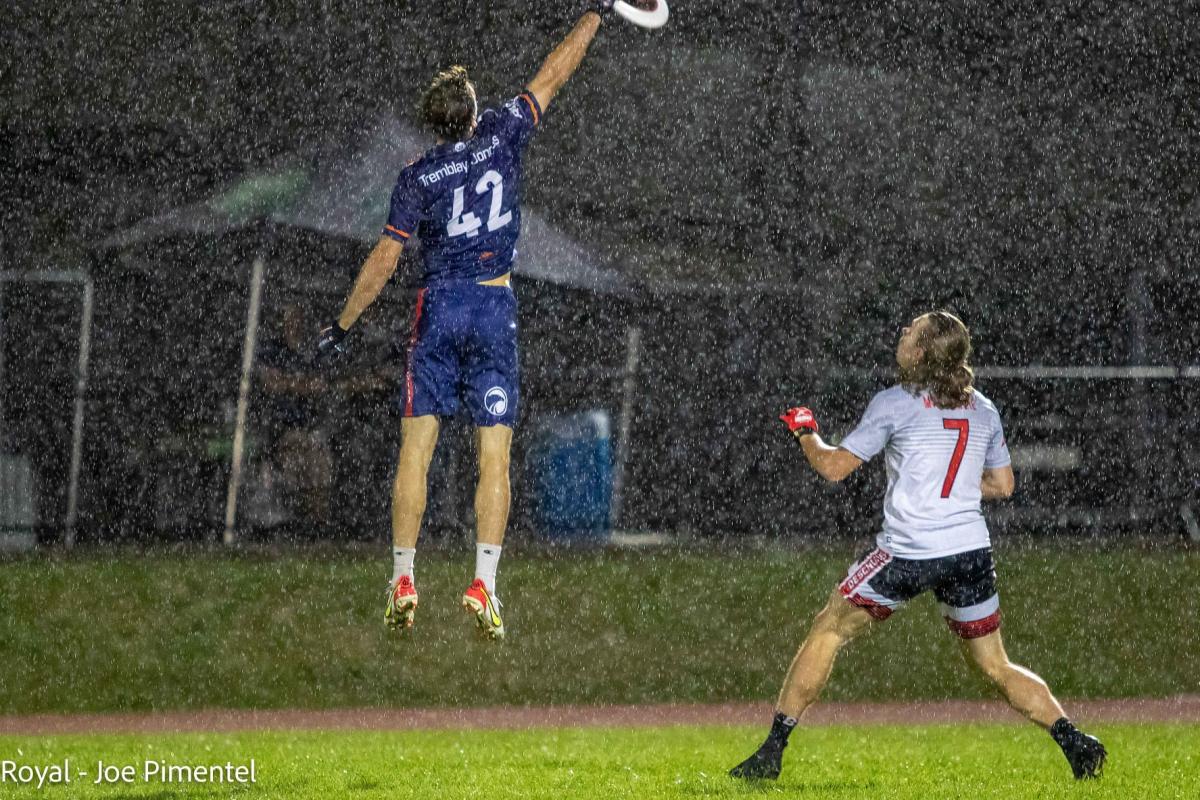 Part of the Royal’s responsibility as a playoff contender will surely be handling their business against Ottawa, though the Outlaws have consistently remained a thorn in Montreal’s side. Ottawa, despite finishing third in a three-horse race last year, still went 2-2 against the eventual Canada Cup kings. Dating back to 2018, over the last eight meetings between the Outlaws and Royal, Ottawa has outscored Montreal 180-175.

The Outlaws, who will be holding their final 2022 tryouts this coming weekend, anticipate bringing back most of their core contributors that have made them a dangerous opponent every time they take the field. Over the past several seasons, Ottawa has been among the league leaders in close losses, and leadership is hopeful that those frustrating learning experiences will pay dividends in the months ahead.

“We were able to show that we can keep up with both Montreal and Toronto last year, and are eager to see how that translates to the other teams in our [division],” said Ottawa veteran Alec Arsenault. 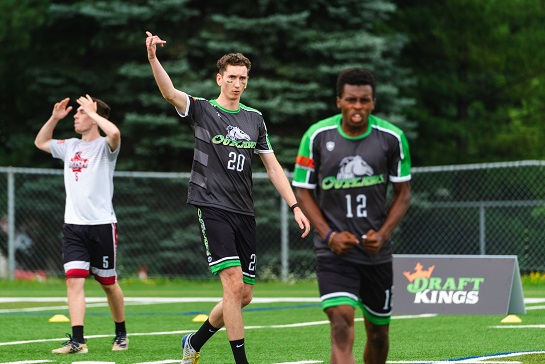 When the Outlaws host Boston on Friday, May 6, it will be precisely 1,020 days since the last time we witnessed an international matchup in the AUDL. While the American teams were able to return to some semblance of normalcy in 2021, the three Canadian franchises have been waiting patiently, not just for the competition, but for everything that comes with it.

“Last year, we weren’t allowed to have our team bus anymore,” remembered Yearwood. “So everyone had to drive; seems like a small thing, but it really stood in the way of the closeness of the team that we’ve had in years past. Traveling to games together, win or lose, is such an amazing bonding experience for all the guys on the team…Having the team bus and being able to travel to and from games as a team is going to be a huge factor in it really feeling like we’re part of the AUDL again. And the increased level of competition is kind of the icing on the cake.”