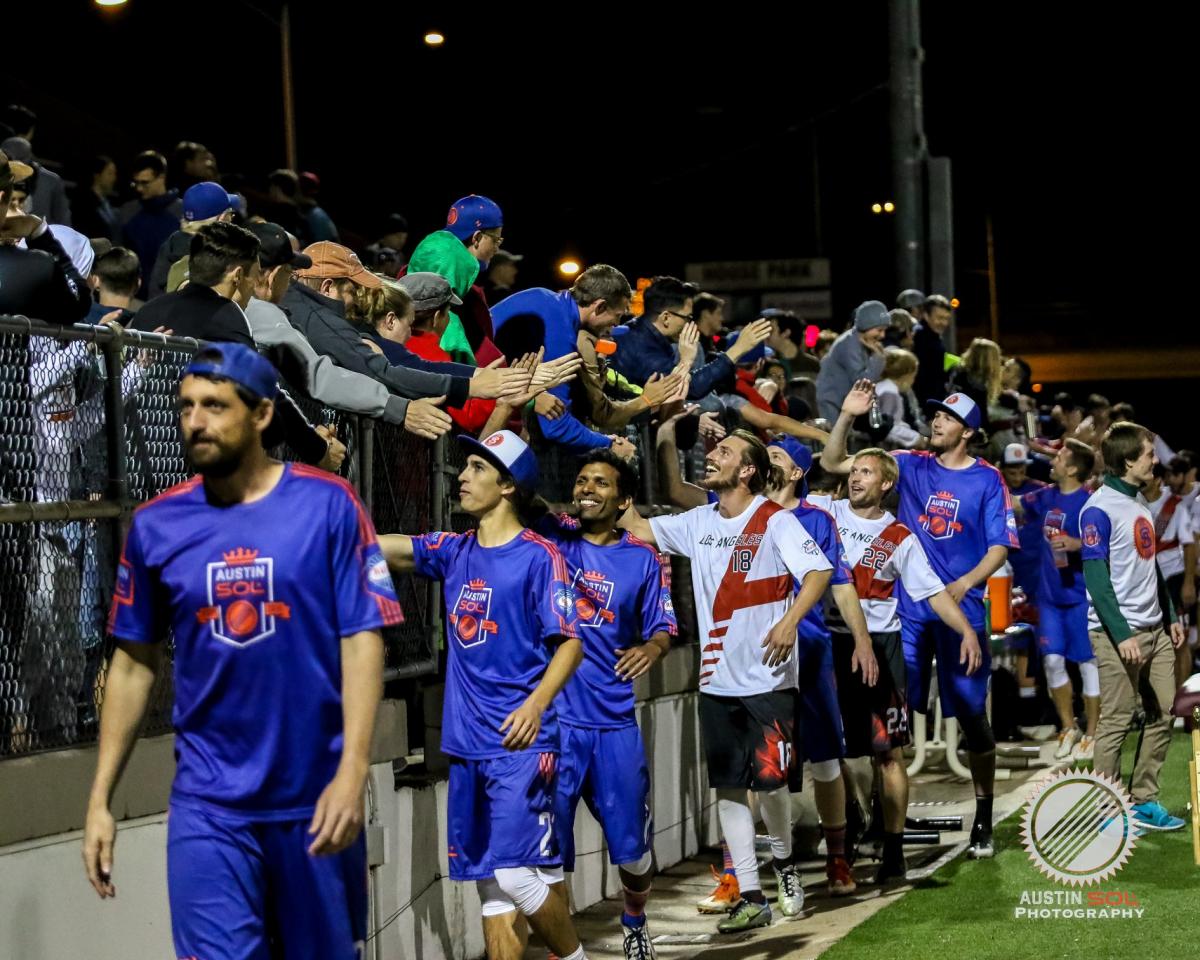 With the 2020 AUDL season now officially cancelled, new television partner Fox Sports will continue to re-air many of the league’s classic games from years past. Next up is the 2018 interdivisional thriller between the Los Angeles Aviators and Austin Sol. Here’s what I most remember about the build-up and aftermath from that particular title showdown.

Great games unfold every week in the non-pandemic AUDL, and unforgettable moments that eclipse excellence usually happen at least once a month. Beyond that, if you’re lucky, you can also experience a transcendent competition, a game that rises into a different tier of gripping entertainment, full of highlights, significance, and captivating drama that elevates the action to all-time classic status. If you’re fortunate, you get a game or two of these each year. 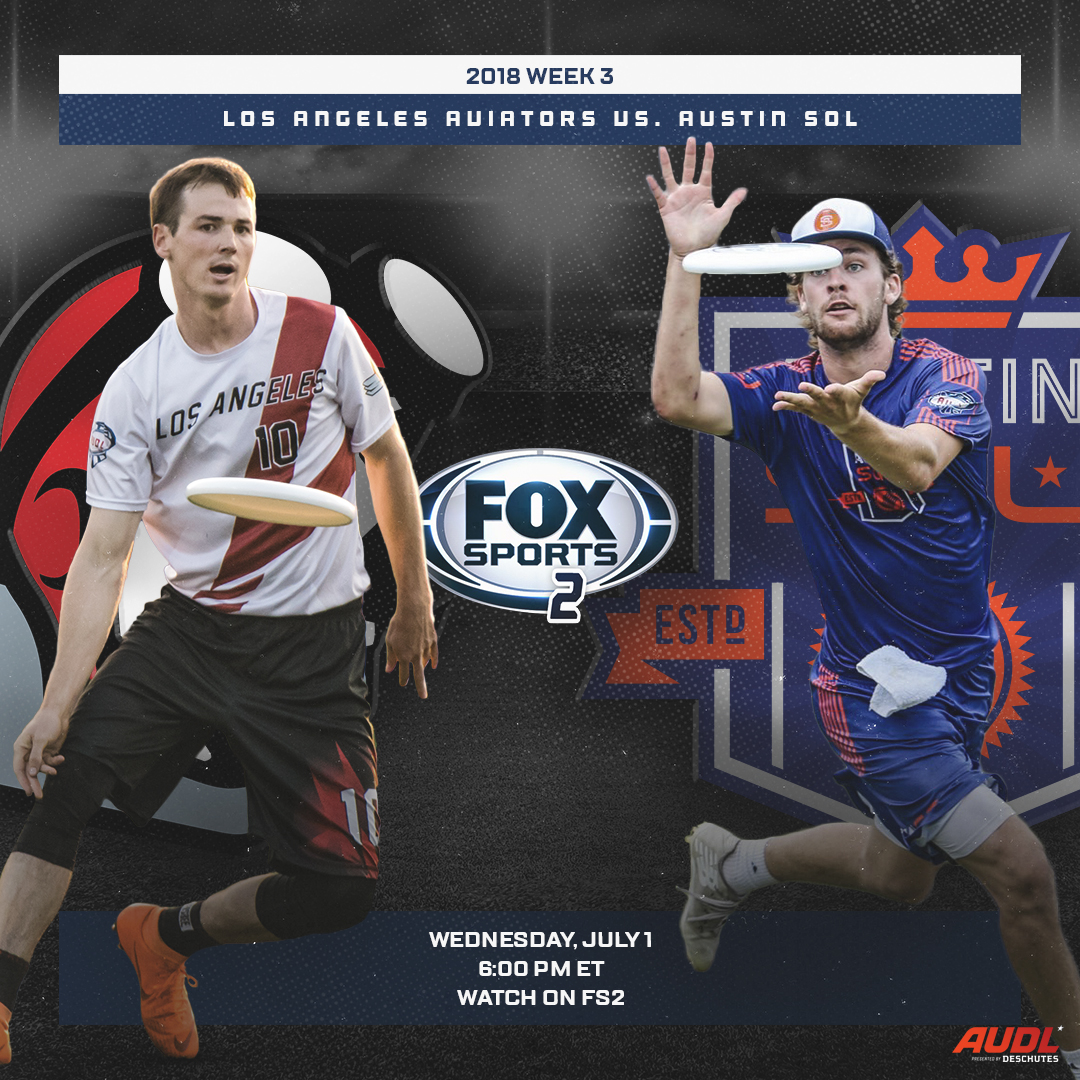 On April 14, 2018, in Austin, Texas, we happened upon an unprecedented interdivisional matchup that delivered more twists and turns, skies and drops, roars and wows than the craziest roller coaster you’ve ever ridden. Looking back, this Saturday night clash did not feature the two most talented teams in AUDL history, nor would it qualify as the most well-played contest among the all-timers, however there’s little doubt in my mind that this Los Angeles-Austin Week 3 battle represented the most jaw-dropping, head-scratching, oh-my-goodness exclaiming 48-minute marathon that the league’s regular season has ever produced. It’s the first non-playoff game chosen to air on FS2, and that speaks volumes about the magnitude of awesome that this back-and-forth affair brought to the table.

Heading into this particular April Saturday, most analysts suspected that both the Aviators and the Sol possessed their strongest squads in franchise history, bolstered by several key additions that could transform them into contenders. Along with a core of solid contributors that had been developing and gaining confidence, Los Angeles was led by three former US National Team stars, all with their own unique story. Eli Friedman had literally been at sea for several years before a happenstance meeting with Aviators’ ownership got the ball rolling on adding him to the team, while other opportunities had brought Tom Doi and Chris Mazur to the west coast after they had contended for titles in the East and South Divisions, respectively, with Mazur bringing championship experience from his time with the 2016 Dallas Roughnecks. That trio certainly brought credibility and lifted expectations, but Austin’s squad felt special too, with a mixture of young athletes and accomplished vets who were jumping into the AUDL for the first time. Most notably, Michael “Tank” Natenberg, who won a gold medal with Team USA at the 2013 World Games and coached the Sol during their inaugural 2016 season, had decided to give it one more shot as a player, and he brought several of his exciting long-time club peers with him, adding playmaking wrinkles that Austin’s AUDL franchise had never had before. Consequently, these were two teams with tantalizing talent that were very much still figuring themselves out when they took the field that night in Austin. Lines were uncertain and required frequent tinkering, leading to occasional choppy play in the first couple quarters, while setting the stage for an absolutely wild finish.

Among other memories from this stunning night were the variety of highlights we saw throughout the evening. Many sequences were quirky and strange, featuring deflected discs that were later caught, or wind-manipulated stretches were both teams were trying to understand the conditions. But shining above the bizarre were the brilliant moments that remain among the most incredible plays in AUDL history, like Brent George’s spectacular ‘dueling layouts’ score when he and Austin’s Kyle Henke were seemingly side-by-side parallel to one another as they dove full extension for Eric Lissner’s flick huck. When you watch the replay, it’s hard to fathom how Henke did not get the disc, though perhaps he was saving his heroism for later. But the dynamic of two dudes bidding simultaneously, and safely, going all out for their teams was a marquee moment that I immediately thought could become one of the signature highlights that the AUDL would utilize for years to come.

Of course, George and Henke were not the only individuals with thrilling layouts over the course of the night. One of the wildest turningingpoints came in the closing seconds of the third, when the Aviators were in position to their first lead of the game, only to get Wolfed as time expired. Jerrod Wolfe, always described by his teammates as the heart and soul of whatever team he’s on, launched his body horizontally for a block as the Aviators were looking to set up a “Hail Mary” shot to close the quarter, and with just precious seconds left, the Sol alertly converted into a buzzer-beating goal that reestablished their lead. The hometown crowd went nuts, though it was just a preamble for what was ahead.

The action kept building. Stunning plays and sequences early were steadily surpassed by what came later, continuing the crescendo that would ultimately climax as the final buzzer sounded, as a 19-year-old kid who had competed with his college team at Conferences earlier in the day authored a play for the ages that vaulted his rise toward stardom.

Initially, when Austin veteran Jeff Loskorn caught the disc with less than five seconds left by the sideline near midfield, he wanted to use his left-handed flick to send a jump-ball toward the corner where towering deep threat Ethan Pollack was positioned, but when the mark wisely denied that option, his second choice—really, his only choice—was a floating backhand toward the middle of the end zone, where multiple Aviator defenders appeared to be in command of the space. A Los Angeles defensive stand would have meant overtime, but we all know now how it turned out, with Henke’s heroics capping the crazy game in breathtaking fashion.

Among my lasting takeaways was this realization: there were so many single moments that could have shifted the outcome of this game. Obviously, one play impacts the next so it’s tough to say decisively that if a team had made this one particular play the result would have been different, yet there were dozens if not hundreds of little synapses throughout the game that felt significant and momentum-swinging. Keep in mind that Henke’s grab as time expired was Austin’s third buzzer-beating goal of the game, all of which felt somewhat improbable with five or 10 seconds left in the quarter. These were just a few of the many, many agonizing sequences that the Aviators presumably stewed over when watching the film afterwards. On a night with so many exciting and special feats of athleticism—like Friedman’s doink-and-adjust stab grab for the tying score that preceded Austin’s last possession—there were an endless list of turning-points, a fact that amplifies the drama during the re-watch, which remains tremendously compelling even if you’ve seen it before.

One quick aside: Part of me fears for the Aviators, their players and fans, as they prepare to turn on their televisions for a doubleheader of devastation. Beyond the heartbreak that they experienced in Austin that’ll be airing at 6:00 PM/ET, FS2 will also be featuring an encore presentation of the 2019 West Division Final at 3:30 PM/ET, and that game, while also a wildly entertaining battle between SoCal rivals, may only add to the frustration for LA folk. I certainly don’t believe that anyone with Fox or the AUDL consciously planned the doubleheader as a way to torture the Aviators, however all Los Angeles loyalists should understand that there’s the potential for some pretty shocking and serious disappointment on back-to-back programs.

But let’s be honest, those emotions are possible anytime you turn on your tv, particularly for a sporting event where, by rule, one team has to win and another has to lose. And that’s one of the things that makes sports so gripping and great, especially as coveted content for networks during a pandemic. Hopefully, there’s a handful of viewers out there who will stumble upon their first ever AUDL experience tonight, become invested, and ride the emotional roller-coaster as two teams they’ve never previously heard of compete in a riveting four-quarter tango that leaves them stunned and speechless by the end of the night. We already know that ultimate can have that effect on people, and this game carries as big a punch as any walk-off homer, buzzer-beating three, or overtime shootout that they could possibly see.

The Aviators-Sol instant classic premieres on FS2 today (on Wednesday, July 1) at 6:00 PM/ET. This broadcast will also be preceded by an encore presentation of the 2019 West Division  Title matchup between the Los Angeles Aviators and San Diego Growlers, beginning at 3:30 ET on FS2. Also, Los Angeles’ Chris Mazur, Atlanta's Christian Olsen, and Austin’s Mick Walter will be appearing on “Live! with Lep” at 8:00 PM/ET tonight on the AUDL Instragram.