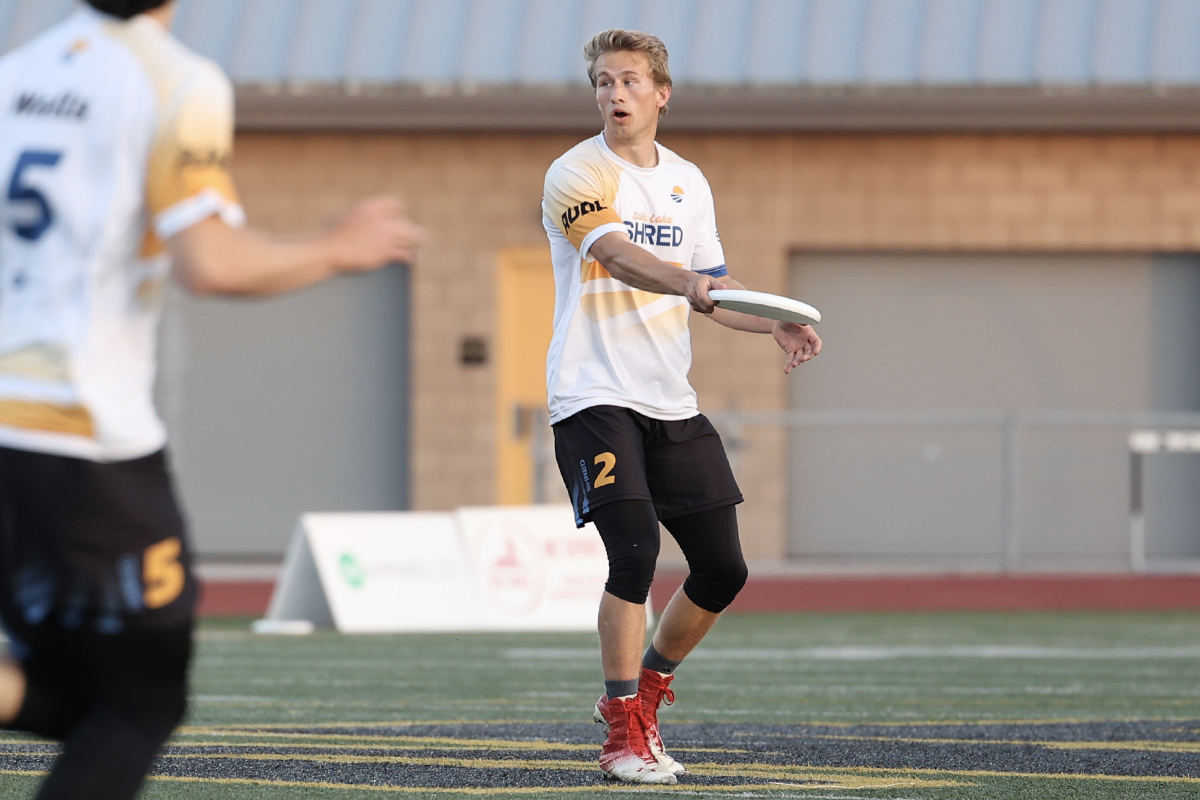 Watch "The Friday Feature" tonight at 9:00 PM/ET on watch.AUDL.tv

After sweeping their Week 1 double header, the Salt Lake Shred are back in action this week for their inaugural home opener against the Seattle Cascades. The Cascades will become the first West Division team to play all three 2022 expansion teams after dropping their first two games to Portland and Colorado. 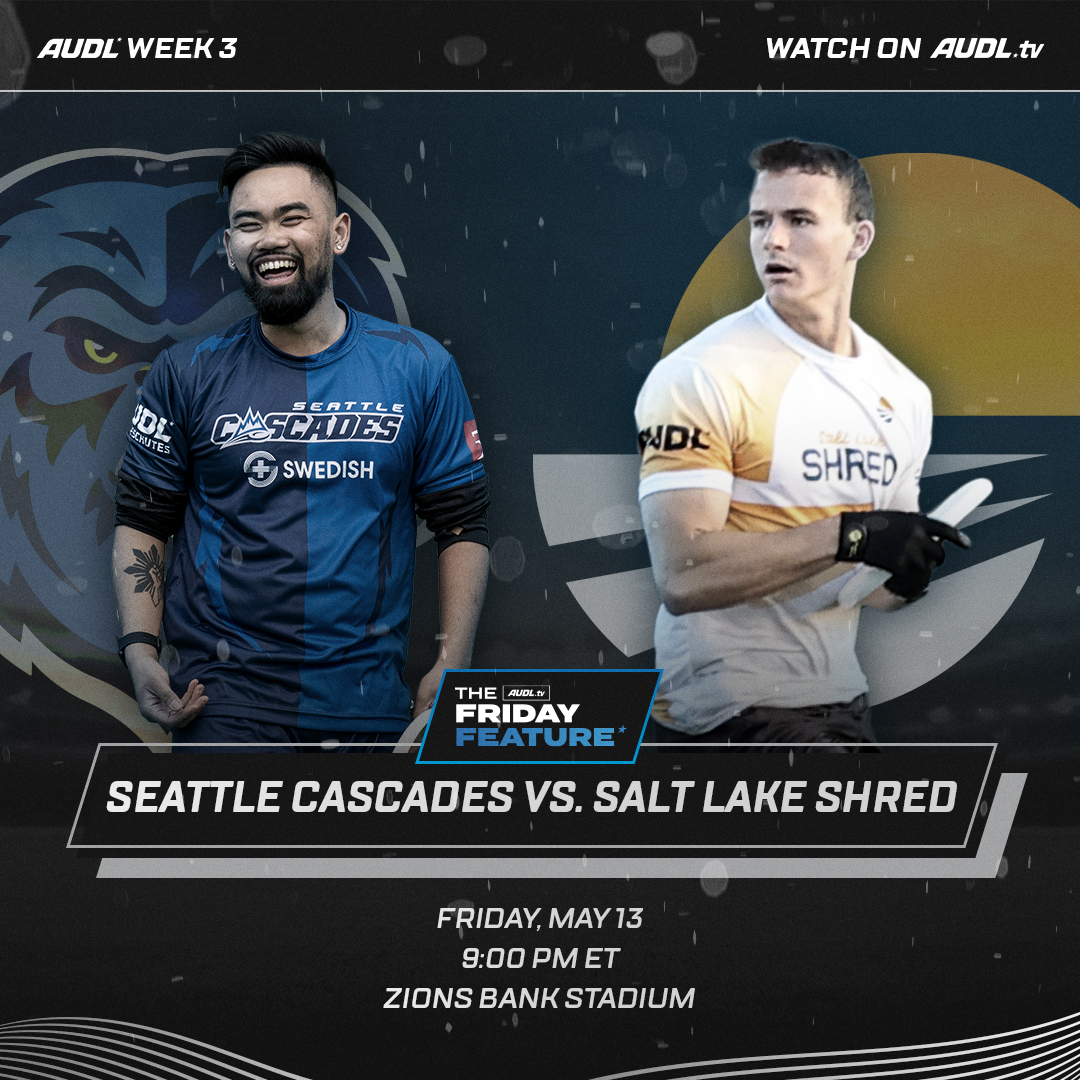 Salt Lake couldn’t have gotten off to a hotter start in their first weekend as a franchise, taking down the reigning West Division champions before beating the Aviators the next day in LA. Converting on 64 percent of their offensive possessions, the Shred scored 24, then 25 goals in SoCal, with their 24.5 scores per game average currently ranking third best in the league.

Featured in both wins were offensive breakout performances from Jordan Kerr, Joe Merrill, and 18-year-old Will Selfridge. Kerr had an extremely productive 2021 rookie season with the Spiders, leading the team with 52 scores, 13 blocks, and nearly 5,000 total yards of offense. Yet somehow he’s taken another step forward, as he’s embraced his go-to striker role in the Shred offense. Kerr tossed 16 assists in Salt Lake’s opening weekend, ripping apart the SoCal defenses with sharp initiating cuts before finding a downfield cutter in the end zone. Two of those cutters, Merrill and Selfridge, were responsible for more than a third of the Shred’s total goals (19-of-49) in Week 1. Merrill seems bigger, faster, and stronger than he was in his rookie season, while Selfridge, who was named to the U20 World Juniors Team, brings a hybrid skill set that seems to perfectly complement the rest of the offense.

In addition to Selfridge, there’s another 18-year-old phenom playing in his third AUDL game tonight: Declan Miller of the Cascades. Miller has been the unquestioned focal point of the offense since Seattle’s opening game, as he paces the team in total yards and scores through the first two weeks of the season. Whether he’s operating from the handler set or initiating downfield, Miller will look to grind down the Salt Lake defense with his non-stop motor and do everything he can to facilitate offensive flow for Seattle. Miller is accompanied downfield by another talented rookie in 19-year-old Zeppelin Raunig, who has already broken free for nine goals and has shown an ability to earn the disc back after turnovers. Both guys should continue to put up numbers against a Shred defense allowing 22 scores per game.

Salt Lake’s defense is arguably just as exciting as their offense. Headlined by rookie Chad Yorgason—whose brother Luke is excelling as O-line center handler—and fifth-year AUDL vet Joel Clutton, the D-line is quickly establishing an identity around their long, playmaking athletes. The resurgence of Clutton, a 6’5” presence in the deep space who has already proven to be a force during buzzer-beater situations, paired with a handful of rookies that don’t hesitate to throw their bodies around have allowed this D-line to dial up defensive pressure when needed, particularly in crunch time. Tonight is also a revenge game for former Cascade Garrett Martin, who came up with a clutch block in Week 1 to set up the eventual game-winning goal against San Diego.

For Seattle, Drew Swanson and Shane Worthington are the key D-line pieces who will have their work cut out for them against the third-most efficient offense in the league. Both guys are fully capable of multi-block games, and Swanson is a good bet to record his first takeaway in a Cascades uniform after surprisingly being held block-less in last week’s debut; Swanson averages 1.9 blocks per game for his career. Seattle’s break chances did jump from eight against Portland to 12 against Colorado, but they converted just twice in each game; they’ll need to establish a more consistent counterattack (if only they still had Garrett Martin…) to stay competitive in this game. 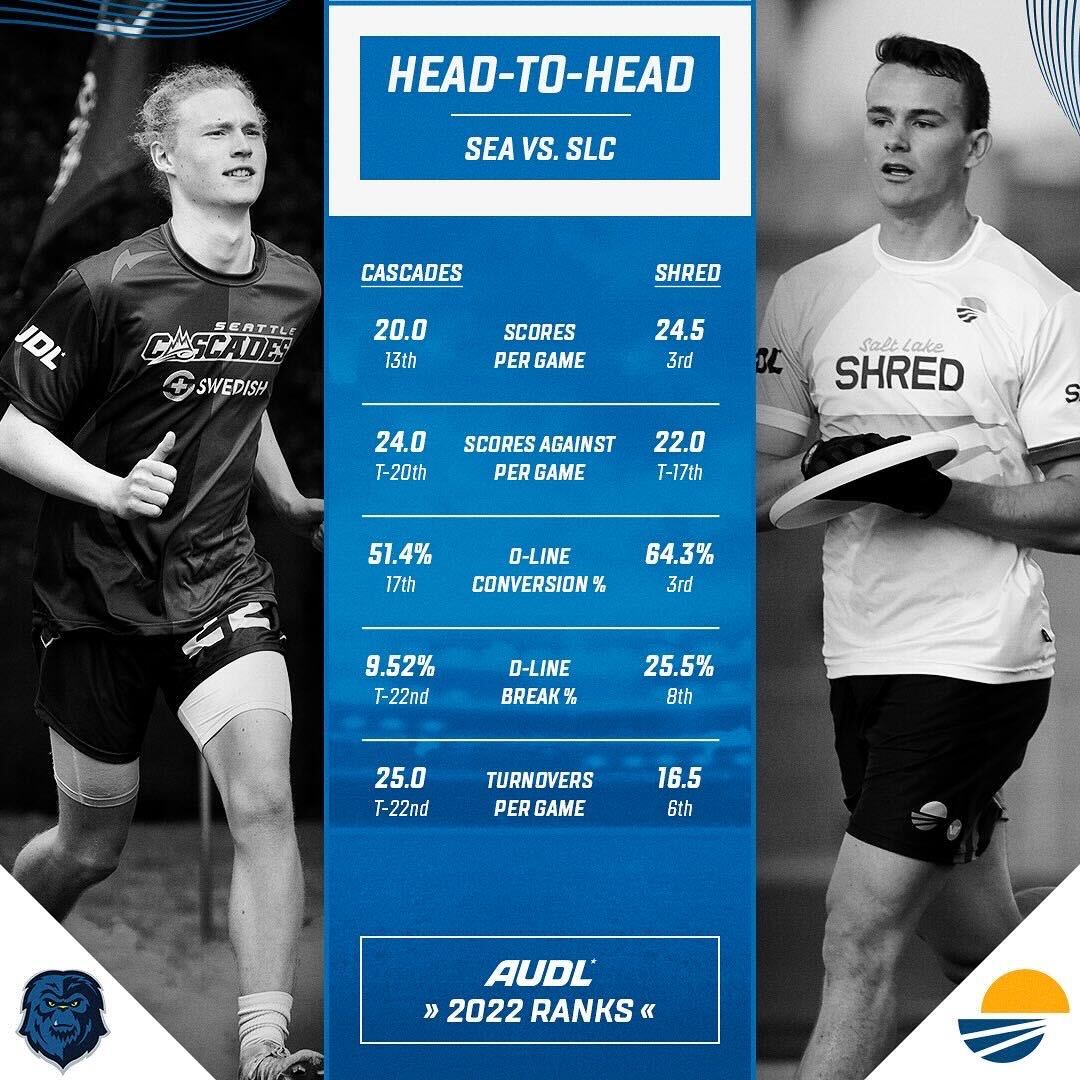 An electric team playing in front of what should be an electric crowd for their inaugural home opener, Salt Lake could run away with this one if Seattle isn’t able to pressure the Shred offense early. The Shred have a chance to assert themselves as the West Division favorites; Seattle has a chance to turn this division on its head.