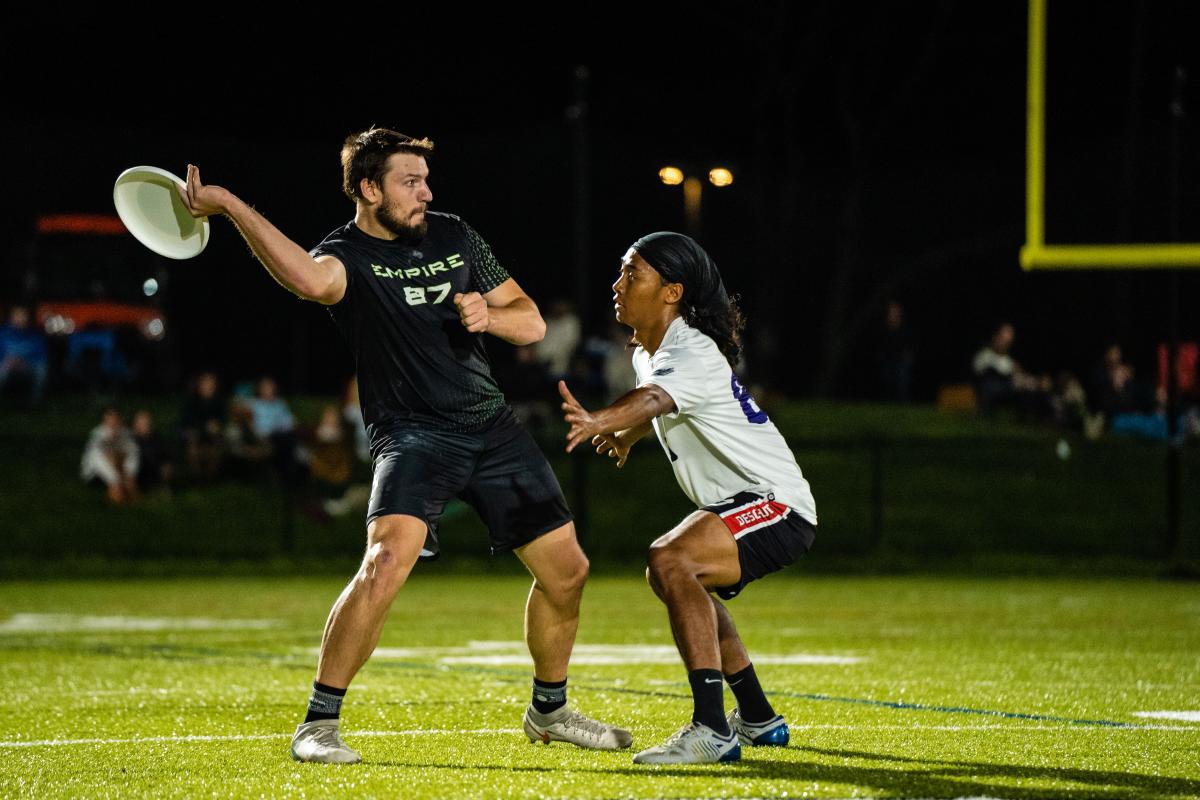 Available to watch live on AUDL.TV at 4:00 PM/ET

The two Championship Weekend teams making their second consecutive appearance face off in the semifinals to kick off the weekend, with the San Diego Growlers and New York Empire boasting some of the most collective star power of any of the four teams.

Both teams come into Championship Weekend with significant momentum following their playoff games, though the two games couldn’t have been more different. In the Atlantic, New York pulled off one of the biggest playoff comebacks in league history, going down 12-7 in the first half before rallying in the second to finally take their first lead of the game in overtime. They then pulled out the win on a Jack Williams to Ryan Osgar Hail Mary buzzer-beater. The week prior, San Diego surged to a 9-4 lead in the first quarter against Dallas and never trailed at any point in the game, ultimately coming away with a 22-18 victory, marking their sixth straight game scoring 20-plus goals.

The Growlers’ late-season signing of 2017 AUDL MVP Jonathan Nethercutt added to an already loaded lineup that includes a two-time MVP in Jonathan “Goose” Helton, a soon-to-be three-year First Team All-AUDL selection in Travis Dunn, and several West Division stars headlined by Lior Givol and Khalif El-Salaam. Signing a former MVP was obviously going to be impactful, but really it’s the ease at which Nethercutt has slotted into the Growlers offense that’s the most noteworthy. In two games with the team, Nethercutt has seven assists, two goals, and 770 total yards on 70-of-71 completions. No player on this offense needs to dominate touches due to the versatility of cutters like Dunn, Goose and Givol, and the Nethercutt-led handler core is having a field day throwing to a lot of very open downfield receivers. Tim Okita is still one of the most reliable distributors in the game—despite an uncharacteristic three-turnover game against Dallas two weeks ago—and first-year Growler Paul Lally is thriving as a backfield complement; Lally has five assists and two goals in the two games he has played with Nethercutt.

The backbone of the San Diego defense has been the play of Steven Milardovich, one of just three Growlers that has played every season since their inception. Countless times this year, Milardovich has come through with clutch blocks in the final minute of regulation to seal Growlers wins, frequently throwing his body around with the game on the line to generate turnovers. Milardovich now has five straight games with two or more blocks, tied with Chicago’s Drew Swanson for the longest multi-block streak this season. A strong handler on the counterattack, Milardovich’s recent play has led to the Growlers averaging 7.5 breaks per game over their last four—they recorded seven-plus breaks just twice in their first nine games of 2021.

The defining pieces of New York this season have been their Big 3: Ben Jagt, Ryan Osgar, and Jack Williams. All three get boosts when playing with the other two, and all three have a case for league MVP. With Williams in the backfield, Osgar playing midfield striker, and Jagt wreaking havoc downfield, New York has maximized their offensive star power by giving each of the three their own space in which to work. The trio has combined for an absurd 154 assists, 104 goals, and 1,101 completions this season, averaging 21.5 scores per game between the three. We saw New York lean on them in the second half of their playoff game, with Williams playing a career-high 39 points on the night and Jagt and Osgar not far behind at 37 and 28, respectively. The best three players at Championship Weekend will likely see the field more than anyone else on the team, especially if today’s game stays close or if New York goes down early.

On the defensive side, New York has regressed a bit since their 2019 season, though they still possess enough defensive playmakers to change momentum at any point in the game. Jeff Babbitt is still one of the most formidable free safeties in the league, and Marques Brownlee, the Drost Brothers (Mike and Ryan), and Ben Katz round out a defensive core that has repeatedly proven capable of generating turnovers when the team needs them most.

New York averages the fourth most points per game in the league. San Diego allows the fourth fewest. With a hungry D-line and an O-line shaping into peak form, the Growlers could push the defending champs from start to finish, especially if they’re able to take advantage of turnovers and (maybe? But probably not) contain the Big 3.