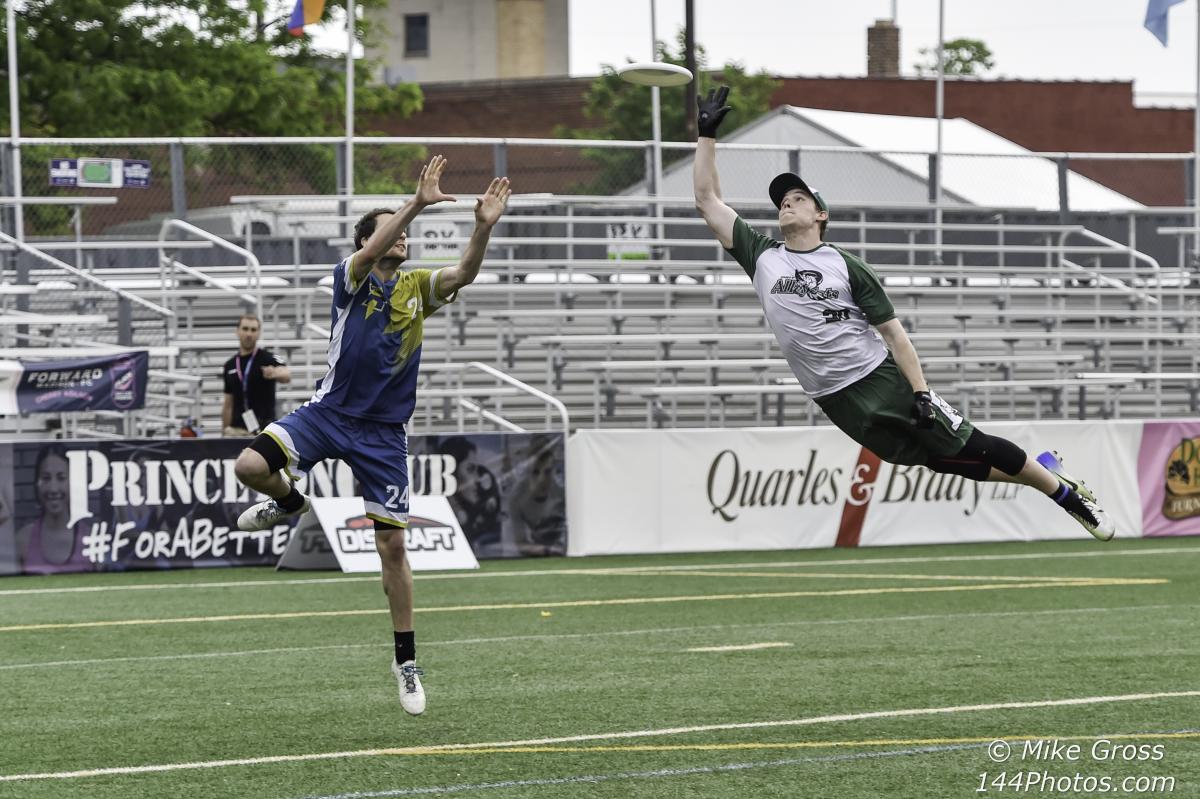 No lead is safe in this week’s tripleheader, featuring three games where momentum feels all but meaningless. Furthermore, all three matchups pit divisional finalists from the previous year, giving these Week 9 showdowns an extra few notches of intensity and importance. It’s also interesting to note that of these six teams that stood among the final eight squads left in the prior postseason, only three returned to the divisional final a year later.

I remember being really excited to watch this game and then feeling somewhat disgusted when Indy fell behind 7-2 in a non-competitive opening quarter. A few days later, I wrote in the Tuesday Toss that while the score was 7-2, it felt more like 20-2. That’s how ugly things were early for the Indianapolis AlleyCats. But as the intro indicates, the Madison Radicals were not safely ahead by any means, and Indy easily evened the score by the end of the third quarter. Considering that Madison’s 46-game home winning streak against Midwest opponents had ended a few weeks earlier against Minnesota, reality now felt uncharacteristically wobbly for the Rads, who suddenly were in the unprecedented territory of potentially dropping back-to-back regular season home games for the first time ever. There were several defining sequences that shifted the balance of power in the Midwest Division last season, but the fourth quarter of this contest was as vital as any of them. And when Indy’s Nick Hutton delivered one of his patented jaw-dropping blocks late in the game, it may have been the first moment where AlleyCat veterans’ belief shifted into certainty. For Cameron Brock, Keenan Plew, and Travis Carpenter, the ever-productive trio who have all played in every AUDL season since 2012, this Week 9 wow became a landmark moment in their careers, and an achievement that they will absolutely never forget.

After a long and thrilling day watching College Nationals in the blistering North Carolina heat, I remember leaving the field complex and driving cross-town for this highly-anticipated AUDL Game of the Week featuring 5-3 Raleigh Flyers and 4-3 Cannons. These two teams certainly were not fond of one another, and I remember being really fired up and hopeful for another compelling chapter in the rivalry. Three of the previous four meetings between the Flyers and Cannons, including Jacksonville’s 25-24 two weeks earlier, had gone to overtime, so the track record was certainly there for another down-to-the-wire night. Interestingly, the two most dynamic Cannons in this game were Stephen Poulos and Mischa Freystaetter, a former and future Flyer, respectively. Poulos registered eight assists in 62 completions, while Freystaetter tossed four assists and caught 10 goals, the second time in his career he recorded double-digit goals in a single game. Cannons high-usage handler Cole Sullivan also accumulated five goals and five assists on the night, but it’s worth noting the Flyers’ offensive balance, especially in contrast to Jacksonville’s stars. Teen phenom Terrence Mitchell combined for seven scores—three assists and four goals—while eight other teammates added at least four scores apiece. And while it looked like Raleigh was in control for much of the fourth quarter, the Flyers’ five-goal advantage with less than three minutes left shockingly began to dwindle late, giving the Cannons an improbable opportunity to steal a result in the waning moments. Don’t quit on this game until the clock reads all zeroes!

The West Division’s two SoCal squads were separated by just a single game in the standings entering their eighth game of the year, giving this always enticing matchup some additional sizzle. And when the Los Angeles Aviators jumped in front 9-5 midway through the second quarter, it certainly felt like the race was bound to tighten by the end of the night. However, this contest was also a tale of two halves, and the Growlers roared on a 9-3 second half run to survive on the road against their rival, a victory that made the San Diego Growlers the first AUDL team to officially clinch a playoff spot in 2019. For a franchise that was only three years removed from going 2-12, that accomplishment certainly felt significant. Travis Dunn, Sean Ham, and Goose Helton all played critical roles for the Growlers’ offense in getting things back on track after a sluggish start, while San Diego struggled to slow down Los Angeles rookie Joc Jimenez, who had just a few days earlier won the first ever fan vote to earn his spot in inaugural AUDL All-Star Game, which was scheduled for the following week. Jimenez racked up six goals before suffering a scary injury late in the game, but fears were eased when it became clear he would be alright to compete in Madison at All-Star festivities. Fellow Aviator All-Star Sean McDougall also had a strong game, while offering a frank assessment of the Aviators’ inability to capitalize on their four-goal lead. “I would love to say that the Growlers made a halftime adjustment that really bamboozled us, but at the end of the day it was us unable to execute our offense and us making silly mistakes down the stretch that got us,” commented McDougall, who registered multiple goals and multiple assists for the third straight game on this particular Saturday night.