Disc In: A Chat with Tim Okita | AUDL
Skip to main content 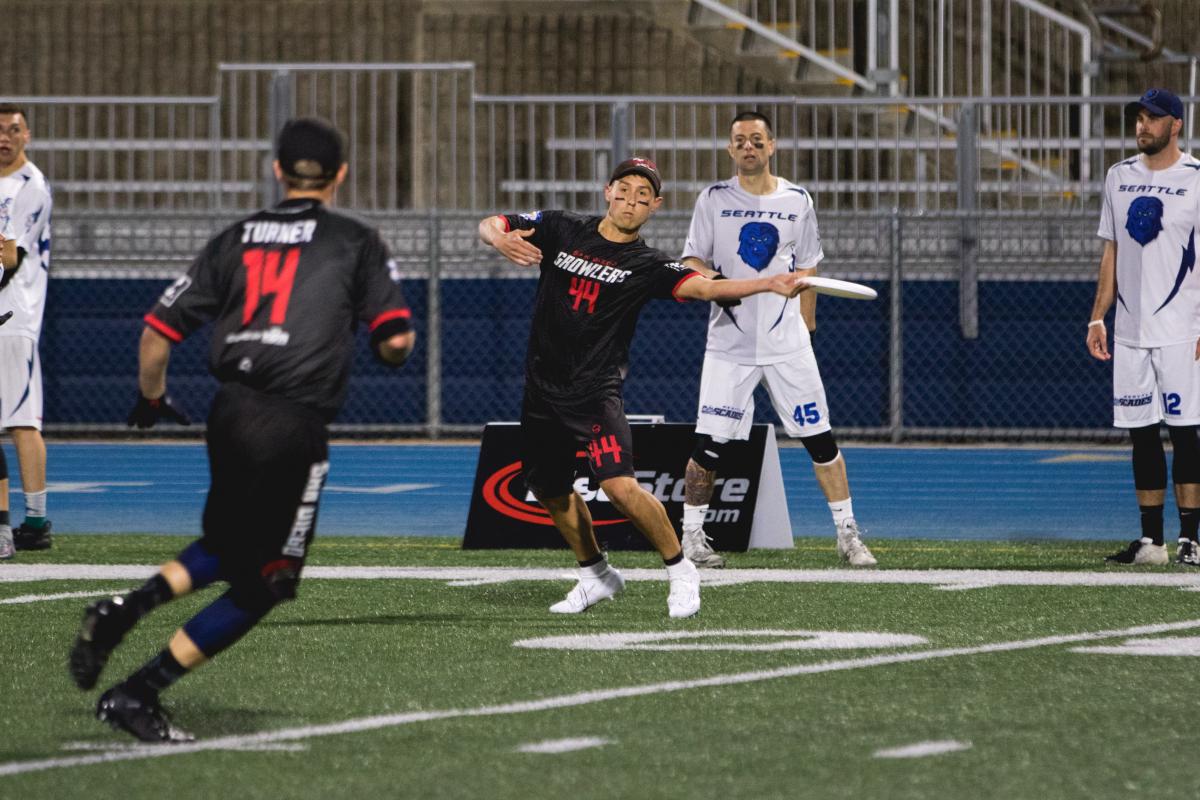 While many players need to be coached out of their youthful gunslinging mentality, Tim Okita of the San Diego Growlers has been a student of the game since his college days at Cal Poly SLO, where he tried to embrace the mindset of always taking care of the disc. Several years later, this simple belief regarding the preservation of possession has enabled him to become a mainstay in the Growlers’ offensive backfield, where he’s completed around 97 percent of his throws as a high-volume handler over his two seasons in the AUDL.

Okita’s steadiness can be represented well by these numbers: over his last 15 games dating back to the end of the 2018 season, he’s only had throwaways in five of those 15 contests, a remarkable statement considering he’s averaged more than 43 completions per game during that stretch. Furthermore, he owns a 98.3 percent completion rate in his past 15 games, including three postseason contests. To put that in perspective, of the 49 players who finished the 2019 regular season with at least 300 completions, no one managed a percentage better than 97.9. Indeed, Okita’s calm conscientiousness with the disc has lifted him into the upper tier of handlers around the league. Also, it’s worth mentioning that the Growlers have gone 11-4 in these 15 games, with half of those losses coming in the postseason. 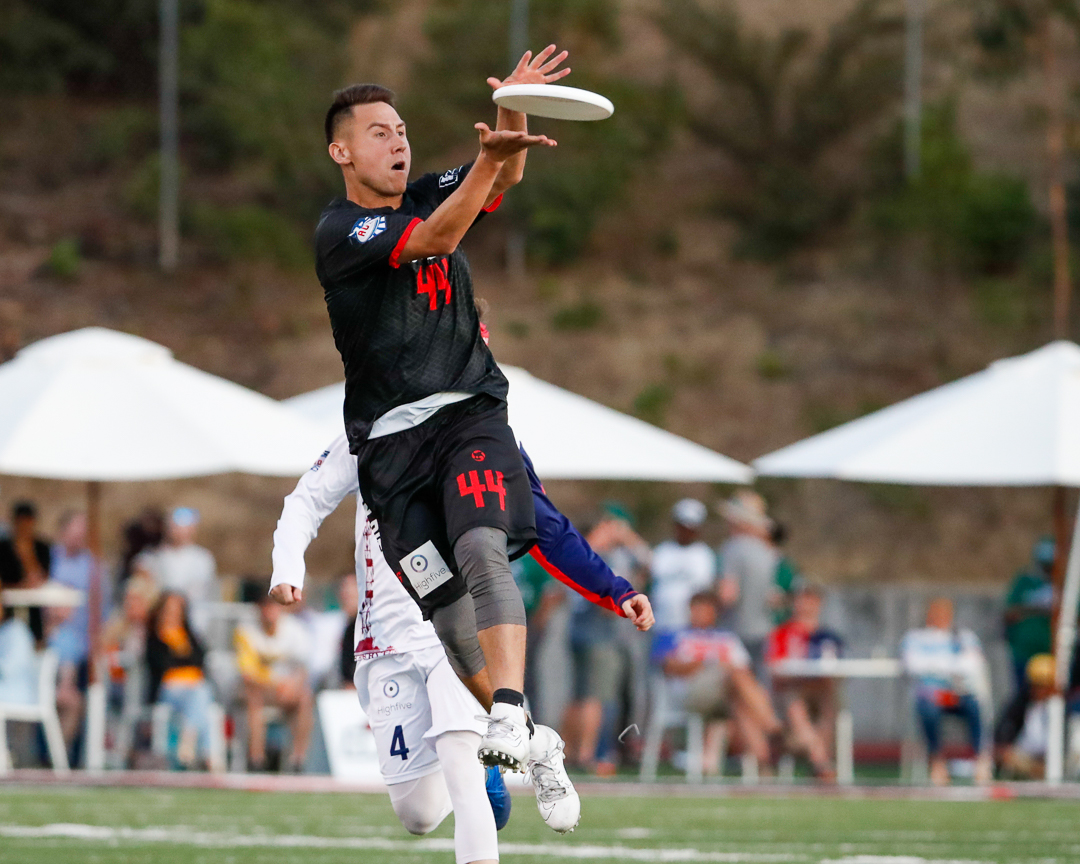 Beyond the efficiency, Okita ranked 14th in the league with 44 assists in 2019, a good indication that he’s not just tossing safe resets every time. Among lefties, he finished second in the circuit (with eight fewer assists than Philly’s Sean Mott). He mustered +4 or better in seven of his 10 regular season appearances, headlined by a turnover-free +7 in his 2019 debut, in which he went 29-for-29 with five assists and two goals in a five-goal win at San Jose.

“Tim Okita has a really good give-go game and will beat you up and down the field if you aren’t paying attention,” remarked teammate Dom Leggio after that particular win over the Spiders. “He credited his +7 performance to some nice grabs from his receivers, but he had a very solid game. His best stat was zero turns on 29 touches, a lot of that being in windy conditions.”

Okita celebrated his 26th birthday this past May, indicating that his prime has just begun. Certainly, the Growlers hope that he will remain a key part of the team’s O-line core for the foreseeable future.

I caught up with Okita last week to learn about his outlook on being a lefty, his journey into ultimate, and his thoughts on the 2019 season overall. The conversation, which took place prior to the news about the 2020 season officially getting cancelled, has been edited slightly for clarity.

Evan Lepler: Firstly, how are you and what has your life been like since the world shifted so dramatically in mid-March?

Tim Okita: Well, I have kind of turned into a bear in hibernation. Work has taken over my life. I'm mostly on a work/sleep grind. The achiever in me, like in ultimate, sees this situation as an obstacle to overcome, and I do that by giving it everything I have. 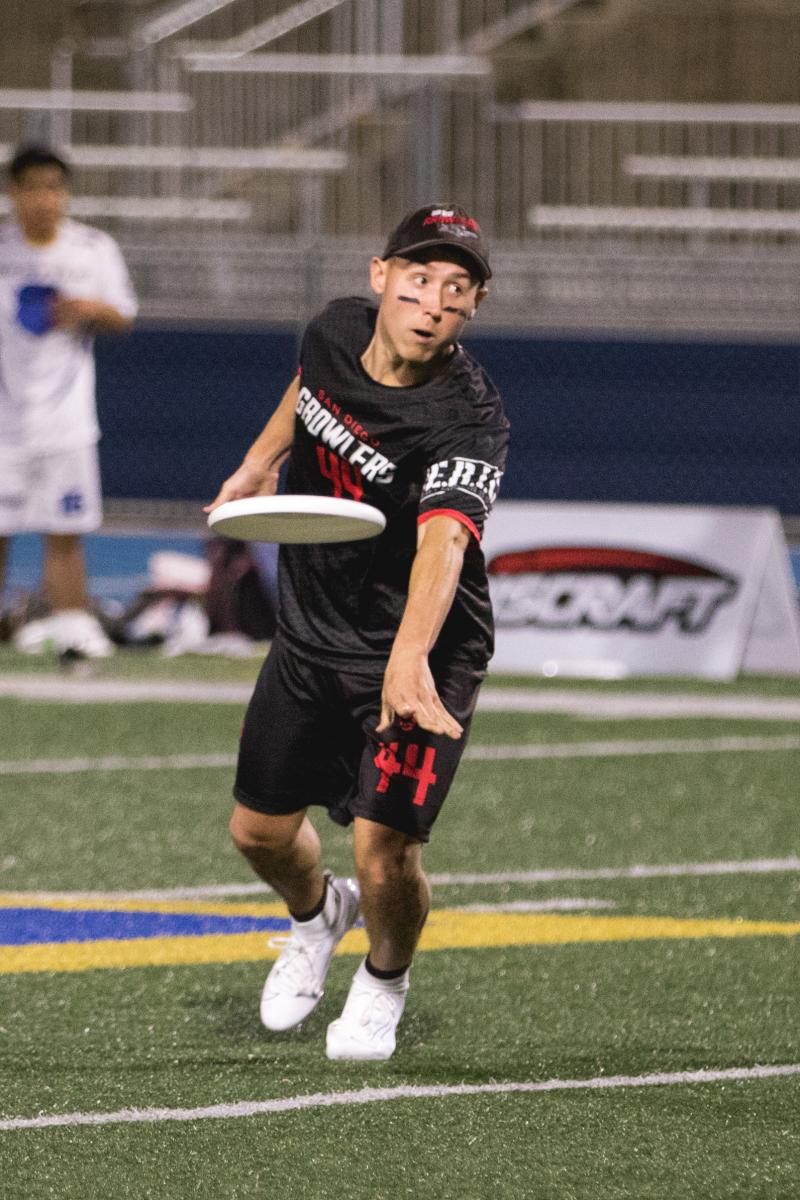 EL: What have you done to try and stay in shape over the past few months? And if the season started tomorrow, what percentage of the best version of yourself would you estimate you'd be?

TO: I’m not going to lie, it's been tough to stay in shape, not because of a lack of will, desire, or know-how, but because of work that increased significantly once the lockdown started. However, now that work is starting to slow down and gyms are reopening, I've been pushing to get in four workouts a week. I would say if the season started tomorrow, I'd be at 75 percent of my best self. With a month to prepare, I'd be back to where I was just before the start of the season.

EL: So this chapter of the "Disc In" series is focusing on lefties, who are obviously a rare and occasionally bizarre-breed. I say bizarre because of all of the folks who, say, throw lefty but write righty, or have some other baffling combination of ambidexterity throughout their lives. Where do you fall on the spectrum in terms of lefty specialization? In other words, can you share whether you're lefty for everything, or how you divvy up your handedness for your life activities, writing, eating, throwing, etc?

TO: Anything requiring a dominant hand only, I use my left hand. However, for activities that use both hands/feet in the process, like golfing, baseball, snowboarding, surfing, etc., I act as how a righty would. I blame my father for this. He only had right handed golf clubs when I was growing up so I had no choice but to be right handed. 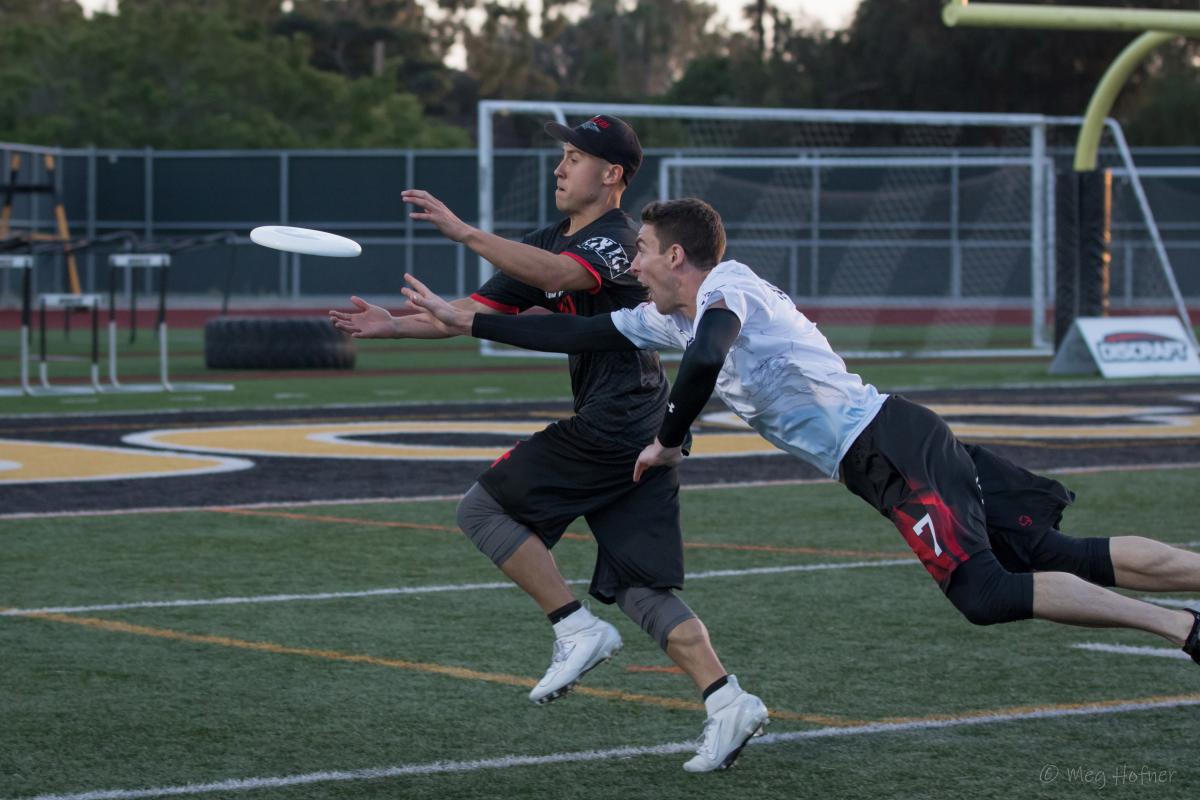 TO: I don't see it as a disadvantage in life. If there's any situation that does not suit a lefty well, I either adapt or come up with a better solution. In ultimate, I do see it as an advantage. Mostly because ultimate is so reactionary and you can't treat lefty throwers the same as a righty thrower on the mark. So unless defenders are making a conscious effort to change how they defend, it's often easy to throw around people.

EL: Moving away from the lefty conversation, can you quickly share your general narrative about what sports you played growing up, how you discovered ultimate, and when your passion for frisbee really took flight?

TO: Growing up, I played a lot of different sports, mainly baseball, basketball, and golf. My brother, who's three years older, went to Cal and ended up captaining the team. He introduced me to the sport and got me playing pickup before going into college. Once I got to Cal Poly SLO, I immediately met some great friends through the ultimate community there and continued to grow and get better. I think between junior and senior year is when I became very committed to not only be the best player I could but learned to lead others since our goal was to make Nationals. 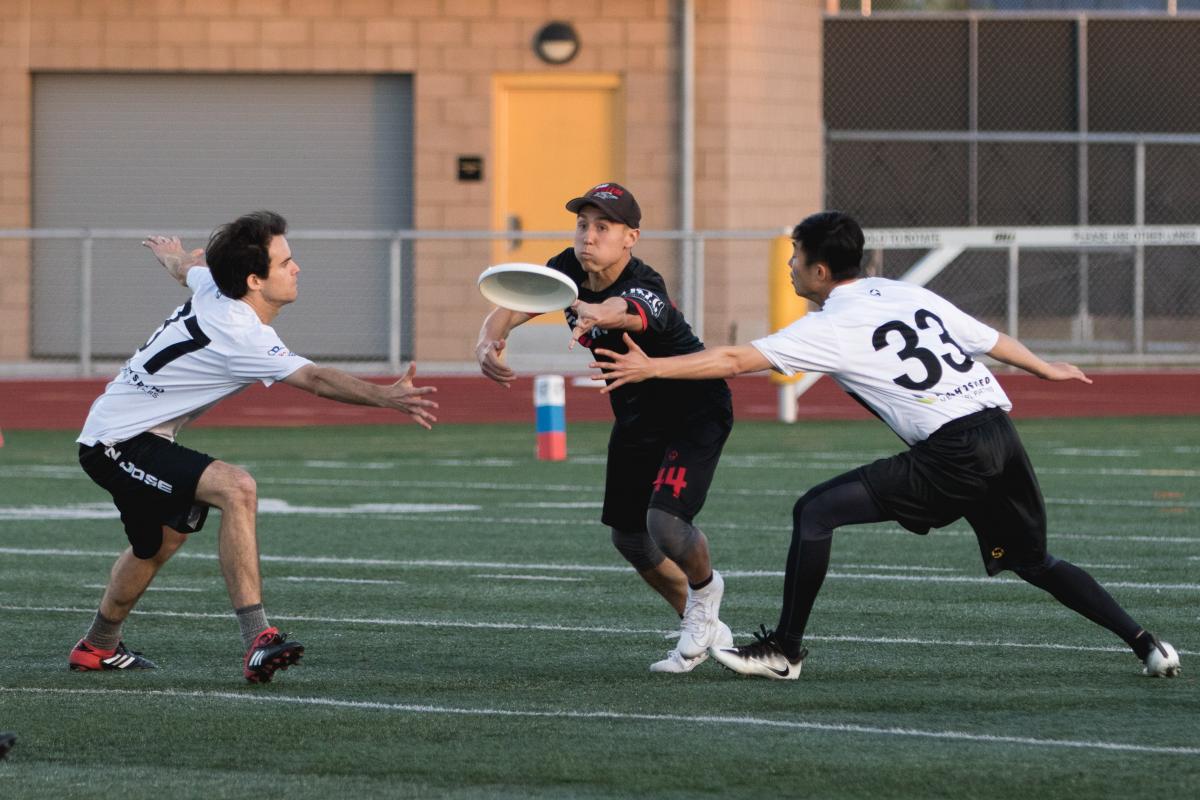 EL: In your two AUDL seasons, you've completed about 97 percent of your throws, obviously an impressive rate that explains why you handle for your team's O-line. The question is about the mindset of maintaining possession, and I'm curious how you've developed that mentality as a thrower throughout your career, from college to club to the AUDL? Is there a key person or mentor that you looked up to in terms of valuing the disc the way you do?

TO: Well first of all, that completion rate is indicative of the amazing players on our team. I’ve been bailed out numerous times by our receivers. But I think this mindset developed in college from watching teams like Revolver and the Japanese National Team. It was clear to me that the best teams didn’t just have the best players, but they weren’t turning the disc over. It seems there’s a strong correlation between the number of unforced turns and how good your team is. It kind of follows the old saying “you can’t lose if you don’t turn the disc over.”

EL: Between the backhand, forehand, hammer, and scoober, which do you think is your best throw and which is your favorite throw?

TO: My best throw is a break throw. Joking aside, my forehand has always been extremely accurate.

EL: Having mostly played offense throughout your AUDL career, who would you say have been the toughest defenders you've had to deal with?

TO: Funny enough, the best defenders I’ve ever faced have been on my teams. First Cameron Wariner in college—who won Ultiworld’s Defensive Player of the Year in 2017—and then players like Max Hume and Jacob Bartholomew on the Growlers. I attribute a lot of my success on the field to the hours of practice competing against them.

EL: Looking back on the 2019 Growlers' season, what was the highlight or highlights for you personally? What are the aspects of the Championship Weekend experience that you think about the most as you wait for the chance to play ultimate again?

TO: Winning the West Division and making it to Championship Weekend was by far the best accomplishment. But losing to Dallas has always been the most prominent memory; the feeling that we tried to play the same offense as we always did that season against weaker defenses and that our adjustments came too little too late to have a comeback. I’m relishing the opportunity to take it to them. 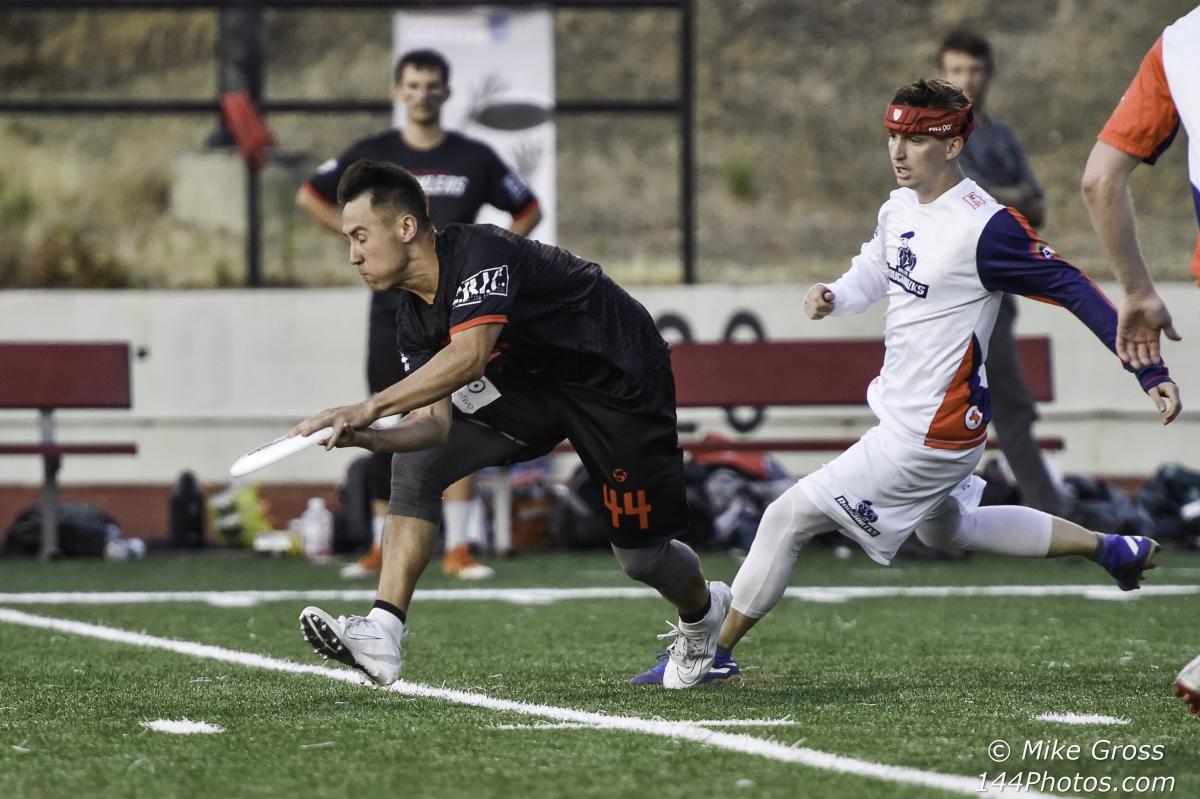 EL: What was your first reaction to the offseason news about AUDL realignment, particularly with the two Texas teams joining the Aviators in the West?

TO: Every year, there are some guys who question wanting to keep committing to Pro and Club. Ten months a year of traveling for practices, double weekends, games and tournaments is a lot. But the realignment gave a lot of extra motivation for better competition and being able to travel to Texas. I think the consensus is that this is a great thing.

EL: And lastly, who's your favorite lefty, and why?

TO: Well that’s tough to say, I’d probably say it’s a tie between my best friend, Graham, and my girlfriend, Emily. What can I say? Maybe I have a bias.